J. Douglas Hines spent 40 years in the commercial seafood industry, serving as COO of Bumble Bee and owning one of the largest distant-water fleets to fish the Pacific Ocean  – but in 2017, he decided it was time to leave the industry behind.

“I also saw the alarming amount of plastic and trash in the oceans, as well as the ongoing misreporting and overfishing, and decided I could no longer be involved,” Hines says. “I withdrew 100 percent from tuna, as it was impossible to see a sustainable future.”

He says he was aware of foreign fishing fleets relying on forced human labor, importing illegally harvested seafood into U.S. fisheries, and using unregulated, potentially dangerous, vessels – all in addition to the environmental impacts.

“The damage being done to the ocean is real. As real as global warming,” he says. “Reefs are being damaged at such an exponential rate that many may never recover.”

After leaving Bumble Bee, Hines took control of Atlantic Natural Foods, which owns a small group of plant-based food brands. Among the brands was Loma Linda, a company dating back to 1890 that had been making vegetable- and grain-based versions of canned cocktail sausages and steaks for over a century. 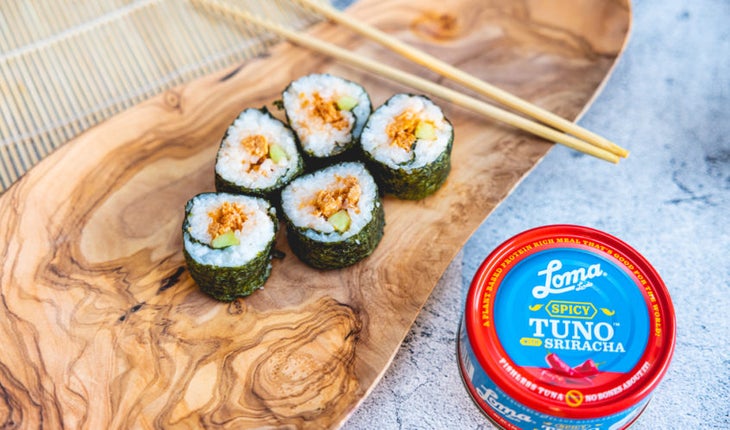 “We quickly came to understand that an alternative protein source for fish was much needed,” Hines says. Under a refreshed Loma Linda banner, his team developed TUNO to fill that need. “We are constantly improving the texture, color, and flavor of TUNO and challenging ourselves creatively to improve the product and make sure it’s as sustainable as possible.”

TUNO is now available in 30 countries around the world, and has proved particularly popular in Europe and the U.K. Seafood Source recently reported that the company has seen 25 to 30 percent annual growth in each of the last five years, and the product line continues to expand.

Along with that success has come some backlash for Hines – particularly from his own former colleagues in the seafood companies. They claim faux-fish products could destabilize their industry and might confuse consumers who intended to buy actual seafood.

“To be clear, we do not wish to destroy the seafood industry, as millions of people around the world rely on this protein supply. We want to ensure there is a future for the seafood industry,” he responds. “On a global scale, governments do little to address these issues. Earlier this year, only four countries petitioned to the UN to address the trash in the oceans. Only four. It was Germany, Ghana, Vietnam, and Ecuador. Every fish humans consume has ingested plastics […] and the need for government intervention is greater than ever right now.”

RELATED: How Do I Replace Seafood on a Vegan Diet?

Your Microplastic-Packed Gym Clothes Are Polluting the Oceans. These Sustainable Activewear Brands Want to Help.

Doing the Dirty Work: Why Regenerative Agriculture Might Be the Future of Farming

Get recipes, news, and how-tos in your inbox every week

What Does a ‘Food Designer’ Do – and How Are They Changing What We Eat?